In 2008 the Meneage Archaeology Group (MAG) was formed to promote the archaeology and history of the Lizard Peninsula focussed on a multi-period prehistoric site at Boden. Members take an active part in all fieldwork projects (such as the ongoing excavations at Boden) and/or alternatively to attend walks, talks, workshops and meetings on subjects of interest. 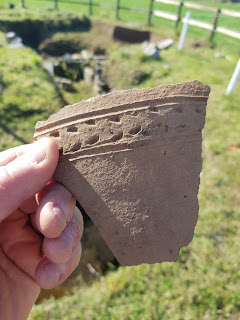 It is a primary objective of the group that the site at Boden continues to be investigated and promoted to the wider public, with an emphasis on the conservation and management of the Iron Age fogou (subterranean passage), continued archaeological excavation of the settlement site and ultimately the dissemination of results and analysis. The group aim, at least once a year (eg the Festival of British Archaeology), to open the site to the general public and also to local schools and colleges for the promotion of the archaeological site at Boden and the work of Meneage Archaeology Group.

All projects are carried out under the guidance of a professional archaeologist who is a Member of the Chartered Institute for Archaeology.